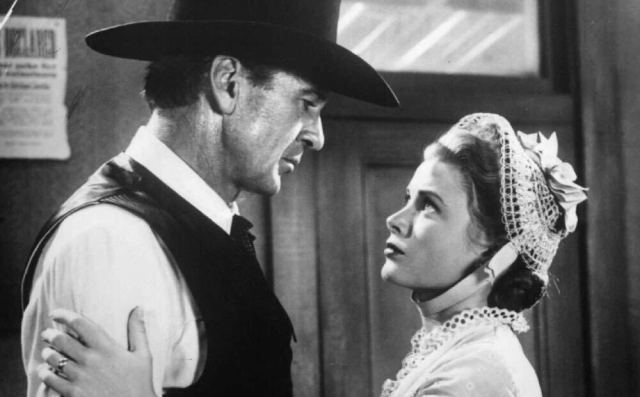 “High Noon” (1952), directed by Fred Zinnemann, cleverly uses the ominous titular time slot as a tool to build anticipation and drama in a film where the climax is set to take place when the clock strikes noon.

As retired Marshall Will Kane (Gary Cooper) prepares to embark on his honeymoon with his new bride, Amy (Grace Kelly), he is informed that a vengeful criminal, Frank Miller (played by Ian MacDonald) has been released from jail and seeks to dual Kane in a showdown. Kane frantically spends the majority of the film attempting to band together the townspeople to help him with the face-off.

The debacle causes strife with Amy, as she is a pronounced Quaker, after we learn that her brother and father died at the hands of guns. She urges her husband to simply leave town with her and avoid the entire ordeal. To her chagrin, he stubbornly resists, saying, “I’ve never run from anybody before.” Meanwhile, the judge who sentenced Miller, Judge Percy Mettrick, flees. Kane’s potential successor, Deputy Harvey Pell (Lloyd Bridges), presents a quid pro quo, takes off when it is rejected. The townspeople feel that their tax money goes to law enforcement, which should save them from having to take part in such violence themselves. Other townspeople, hanging at the Ramirez’ Saloon, are resentful of Kane’s cleaning up of the town in the first place and are not particularly quick to help him. The film “High Noon” explores the various dynamics of a small town and it’s relationship with the police, a timely narrative.

Complicating matters, Helen Ramírez (a brilliant Katy Jurado), who is Kane’s ex-lover, previously had been with the convict Miller, and then after that with Pell, is in the thick of the mess, and is ready to catch the next train, when Amy comes to her for comfort. Suspecting that Kane is staying in town, not to fight, but to return to Ramírez, Amy urges Helen to help her. Their exchange is one of the more intriguing elements of the story, but both actresses were underused. The conversation is vague, and Ramírez inexplicably shames Amy for not taking a gun and standing by Kane’s side in his hour of need, though, she is unwilling to do so herself. “He is not my man,” she rationalizes.

In one of the most iconic Western shots in cinematic history, the stand-off ensues. Kane is left alone in the deserted streets of a deserted town, to face Miller and his posse. “High Noon” is bent on allowing Kane to live out his honor of duty and masculinity, by forcing the confrontation instead of stepping away, no matter what. However, the real character arc is found within his pacifist wife, when she is left to wrestle with the clash between her beliefs and her lovers protection. The story spends far too much time on Kane’s meandering through town, contending with all his conscious objectors, when a more interesting film would have spent more screen time with Amy and Helen, fleshing out the moral ambiguities of being the women sidelining men who are controlled by violence.

Nonetheless, “High Noon” is an entertaining, accomplished film. The 84 tense minutes of the film take place nearly in real-time, bringing us from morning to early mid-day, and it is sharply focused. Unlike many of the other Westerns thus far that saturate the screen with strapping smolders, mountainous landscapes, horse-riding, gun-slinging and robust action sequences, “High Noon” takes a more Sorkinian approach, relying on dialogue heavy storytelling – allowing each various character to present their frame of reference and abdicate for their stance, giving us insight into the laws and politics of a small Western town in the 1950’s. It is a true classic and a must-see.