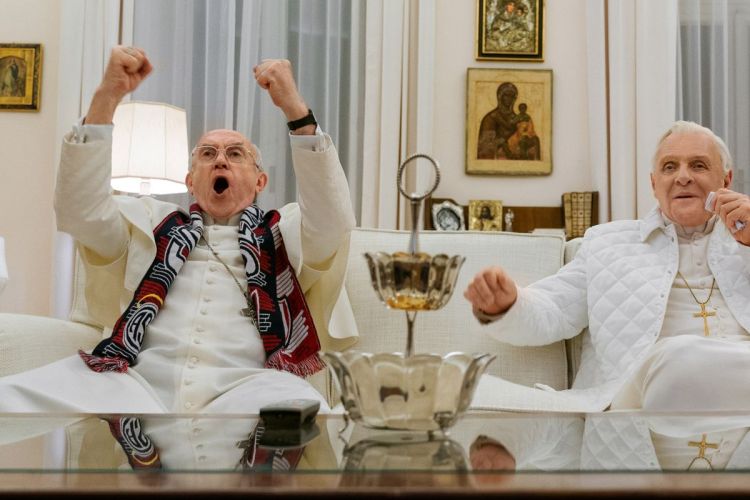 Food: This does not totally count as food to start, but my roommate and I went to Ten Degrees Bar in the East Village because they have the best happy hour in town. Every night during happy hour, they have buy one get one free cocktails – which includes any cocktail off their full menu, meaning all their $13/$14 cocktails! My roommate always gets the lemon drop one, and I enjoyed a Moscow Mule. (But it’s right next to Crif Dogs, so, of course, afterwards we head there!!)

Film: “The Two Popes” (2019), written by Anthony McCarten and directed by Brazilian filmmaker Fernando Meirelles, is an imagined story that is based off of the true events of the first papal resignation in six centuries.

After spending some time in Rome and hearing a mass by Pope Francis, McCarten began to contemplate the man behind the position. The story in the film places Cardinal Jorge Mario Bergoglio at the center, and spans the time when Joseph Ratzinger, Pope Benedict XVI, was elected as the new pope to his resignation, flashing back periodically to tales of Bergoglio’s youth.

Following the passing of Pope John Paul II  in 2005, cardinals gathered at the papal conclave to vote on his successor. Though Bergoglio got a significant number of votes, the election went to Cardinal Ratzinger, who became Pope Benedict XVI. Fast forward to the year 2012, when Bergoglio decided it was time for him to retire and sent his resignation to Benedict.

When he did not get a response for several months, Bergoglio decides to buy a ticket to Rome. Simultaneously, Benedict invites Bergoglio to Rome. In reality, Bergoglio did not need to offer his resignation face-to-face – the roughly 5,000 bishops in the world are required by universal church law to offer their resignations when approaching the age of 75 by mailed letter, not in person. Still, the pope does not have to accept the resignation. However, this allowed for a 2012 fantasized meeting between the two popes before the events of Benedict’s resignation eventually took place later, and resulted in the perfect set up for a film that centers on the dialogue between the two opposing positions.

It is a quietly intelligent film that thoughtfully breaks down the beliefs of the two prominent religious men, based off of their public stances and many of their letters. While a significant portion of the conversation concentrates on their fleshing out their differences combatively, and eventually finding harmony despite those differences, another theme of “The Two Popes” is the two men reckoning with their own flaws.

It is a beautifully constructed portrait of what it might look like to be a world leader, and the true vulnerability that can be found in a position of power. Namely, whether or not one can ever feel worthy of such a role. While the film demystifies the figurehead role and allows the two men to recognize the humanity in their own fallibilities, they are also able to find compatibility and respect for each other within that realm.

“The Two Popes” is a charming film. Cozy, even. There are moments of levity – one where Hopkins plays improvised jazz on the piano as Benedict who is known to play Mozart sonatas. Or another classic line where Benedict notes, “It’s a German joke – it doesn’t have to be funny.”  Though the film is designed to be fictional, it was still constructed around heavily researched truths about each character. For example, Benedict – a child raised under the Nazi regime – is seen drinking a Fanta. Nazi Germany banned Coca Cola products at that time, but the children were allowed to drink Fanta beverages. Benedict to this day still drinks Fanta over wine.  And while the meeting in 2012 is fiction, the two men did meet after Benedict’s resignation, when Bergoglio was already the new Pope, in March 2013 at Castel Gandolfo.

It is slow and quiet, pensive and discreet, but it is poignant. A rarity in film is that both characters experience significant character arc, and grow magnanimously from each other. It is not the most memorable film of all time, but it is well done. In an excellent feat of storytelling, McCarten succeeds at taking two esteemed public figures and expounding upon their private experience. Magnificent.