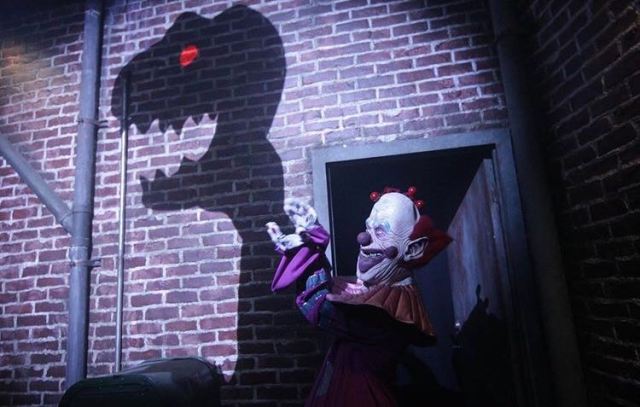 Food: If you’re looking for a delicious Mexican restaurant, with unbeatable Taco Tuesday deals, La Palapa is the spot. They provide a long list of tacos and quesadillas Mexico city style, so there is plenty to choose from, and I highly recommend the frozen margarita. There is also a variety of distilled once, agave mescal and tequilas. It is a simple, pleasant atmosphere in an adobe building located on St. Marks.

Film: “Killer Klowns from Outer Space” is an 80’s cult classic about alien clowns who go on a murderous rampage in a small town, complete with practical special effects like rubber suits and the type of soundtrack you’d hear at an arcade (namely, the theme song created by the band “The Dickies”). The clowns are absolutely gruesome, with large rotting teeth that seem to almost permeate a stench through the screen, and have a series of tricky ways to kill their victims.

The film enters on a group of teenagers canoodling at a look out spot in their town of Crescent Cove. We meet a young couple, Mike Tobacco (Grant Cramer) and Debbie Stone (Suzanne Snyder), when they witness a shooting star and decide spontaneously to go chase after it. What they find is beyond their wildest expectations. They spot a giant circus tent in the middle of the woods, and decide to take a peak inside. Giddy and adventurous, the pair wanders through the fun house with all its nooks and crannies until they come across a daunting drop and decide to turn back. They barely make it out with their lives, through a maze of cotton candy cocoons (full of dead bodies), guns that shoot popcorn and a animal balloon that comes to life.

Directed by Edward, Stephen and Charles Chiodo – better known as The Chiodo Brothers, this film turns quickly into a darkly goofy horror as the clowns move throughout the town and pose an escalating threat to the Cove. Utilizing creative and imaginative ploys, Chiodo Brothers’ clowns kill bystanders by reeling them in with their seemingly innocent performances. One puts on a puppet show in a gazebo, when suddenly the puppet turns angrily at a man enjoying the spectacle, and points her toy-looking gun at him, and disintegrates him into nothing. Another entertains a group of folks waiting at a local bus stop with shadow play, when one of his shadow creatures morphs into a Tyrannosaurus and chomps them all up.

Needless to say, not every strange film becomes a cult classic. It begs the question: what makes a bizarre and not particularly critically acclaimed film go from being mediocre to achieving lasting appeal? Charles Bramesco of The A.V. Club recommended the film, writing that “The film is patently absurd, but the filmmakers are fully committed to that absurdity. It’s hard not to respect.” One film review site (Joblo.com) wrote that it “is the KING of 80’s B-movies and it delivers the tacky goods by the truckloads.”

“Killer Klowns from Outer Space” has a legacy since it’s release. The masks used for two of the clowns were re-purposed for the trolls in a film called “Ernest Scared Stupid” in 1991, SOTA toys launched a line of Killer Klown’s figurines in 2005, and countless companies have created merchandise to reflect the film. There has been rumors about a potential sequel for 31 years, but for now we will all just have to continue to enjoy it solo. This movie is heaps of fun and should easily be a go-to for any Halloween themed screening and without a doubt, will get you in the spirit of the holiday.