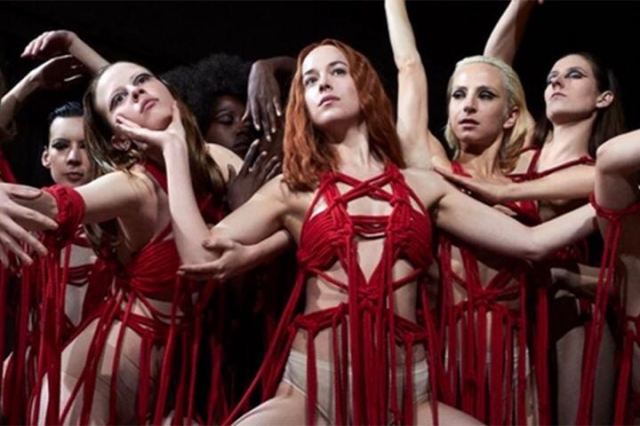 Food: If you want something simple and quick, I recommend this hole in the wall Mexican spot called Al Horno Lean Mexican Kitchen. It’s cash only and there isn’t a ton of room, so I usually take it to-go. You could even pack it in your bag and take it to the theater. I like getting the “Morning Burrito” complete with egg-whites, turkey bacon, low-fat cheddar, avocado, black beans, brown rice and house hot sauce.

Film: Luca Guadagnino’s “Suspiria” (2018) is not a remake of Dario Argento’s 1977 version, but it expands upon it using the same setting – 1970’s Berlin at a dance studio that is used as a front for a witch coven, which houses three “mothers”, elder gods of great power who existed before time and the universe. They are Mother Suspiriorum, Mother Tenebrarum, and Mother Lachrymarum, but underneath their rule, there are witches who will be lead by whomever is voted upon, between Madame Markos and Madame Blanc (both Tilda Swinton). The purpose of the coven is to prime one younger dancer for a ceremony that will give Madame Markos greater power and a new body.

Initially, a young woman named Patricia (Chloe Grace Moretz) is chosen, and we meet her as she rushes to her psychiatrist, Dr. Jozef Klemperer (also Tilda Swinton – we will get to this later) and begins to ramble paranoid fear which is written off as delusions. She then disappears, prompting Dr. Klemperer to begin looking into what she spoke about, and the witches to settle on a new sacrifice to replace her. This brings us to our lead, Susie Bannion (Dakota Johnson sporting long red tresses) who is an enthusiastic and ambitious dancer who comes from an abusive Mennonite upbringing.

Madame Blanc is given the responsibility of grooming Susie for this position, requiring her to plague her with nightmares and push her dancing capabilities, but during this time the two women establish a bond, and Blanc develops a motherly affection for Susie. Everything is brought to a climactic, powerful and disturbing scene that through meticulously choreographed movements, the dance troupe, while in a trance, is witness to a ritualistic ceremony where Susie will be the sacrifice.

Guadagnino creates a film that is sprawling and dark. With a haunting accompanying score done by Radiohead’s Thom Yorke, each scene is colorless and moody, with abrupt moments of deeply unsettling horror. This includes one scene where a dance number sets in a motion an attack on a suspicious dancer in the company, and like a voodoo doll with every twist of one routine, a retching twist of a limb occurs in the other. She is left mangled and wreathing, but still alive. It is the type of gruesome display that is almost impossible to watch, but equally hard to look away. It is graphic and magnetic.

Mia Goth is one of the lead supporting cast members, Sara, another dancer at the company, feels like a neutralizer. Where Susie is mysterious, Sara is open, warm and welcoming. She speaks about her fear for her friend Patricia, and she comforts her friend frequently. Susie, on the other hand, seems to enjoy it. She is a window into this world whose dread and trepidation more closely matches the audiences.

Guadagnino’s “Suspiria” also ties many parallels to the current state of Berlin, in the wake of Nazi Germany, and uses Dr. Jozep Klemperer to thread that part of the story. Dr. Klemperer is a holocaust survivor, who lost his wife Anke during the Nazi invasion. After the disappearance of his client, Patricia, he begins to piece together some of the dance companies activity. Unfortunately, the witches in power are known to abuse their power and manipulate those in their way to achieving what they want, which puts Dr. Klemperer in a vulnerable position.

Now, I have to address one of the aspects of the film that was a topic of mystique during the films press run. Tilda Swinton plays Dr. Klemperer (under, of course, a nearly magical use of prosthetic make up), but a man named Lutz Ebersdorf was credited for this role. Apparently, Swinton’s Klemperer was leaked to the press before the films release, and to cover speculation that it was her, the film’s team created a pseudonym for a man with no prior film history – even going as far to make an IMDB page for him. At one of the films panels, Swinton read a “statement” from him, apologizing for not being able to attend. It was not until months later, when awards season rolled around that Swinton cryptically addressed the speculation, noting that previously she had not been asked the correct question. “The answer to the question to me, ‘Are you playing Dr. Klemperer in Suspiria?’ is always that Dr. Klemperer is played by Lutz Ebersdorf,” said Swinton. But the answer to “Are you playing Lutz Ebersdorf?” is “an unequivocal yes.”

“Suspiria” is about several things, and though, the complicated back story can be hard to follow, the story is grounded in depicting those who abuse their power, and the trickle down affect it has on those abused. The witches of this dance company are elusively compared to the Nazi regime, and Mother Suspiriorum is one who must avenge that power. Who and what Mother Suspiriorium is part of the mystery.

The film is beautifully constructed. It is haunting, unnerving, brutal, ghastly and revolting, while simultaneously showcasing beguiling women performing enthralling choreography. Using a red motif over dreary undertones, and chilling sounds, “Suspiria” encompasses the power of female energy, unforgettable and shocking, and something that you will not be quick to forget.