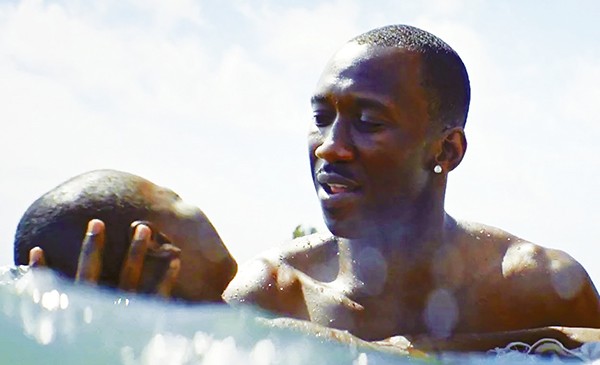 Food: The San Gennero festival was in town in Little Italy, Manhattan, so myself and a group of girls went to a restaurant called Da Nico. During the festival, all the restaurants get to have outdoor seating in the streets, so that was a really fun atmosphere. I ordered a glass of Chianti which was fruity and light and easy to drink. The food menu is broken down into pasta by meat (pesce/fish, pollo/chicken, griglia/steak). I ordered the pasta Carbonara. It was creamy, but not overwrought, and it was flavorful. My friends got the lasagna, the penne pasta and the gnocchi. Everyone loved their meal.

Film: “In moonlight black boys look blue, that’s what I’m gonna call you, Blue.” It is difficult to know where to start with a film like “Moonlight.” Few films have been this masterful and eloquent. It allows deep and complex themes surrounding masculinity, sexuality, and identity to be reflected upon, but not preached. Instead, these themes resonate within character work that is tightly wound and that is so compelling, it is often painful to watch. Barry Jenkins created a musing coming of age film that is divided into three parts —“Little,” “Chiron” and “Black”—the three names used to refer to the same person, our protagonist, who we follow from childhood through adolescence and then into adulthood.

The film starts with a young boy, who is referred to as “Little” (Alex R. Hibbert) running from bullies, hiding in a crack motel. He is found by an older man named Juan (Mahershala Ali), a kind-hearted drug dealer, who takes him back to eat with him and his partner, Teresa (Janelle Monáe). Though, Little is excruciatingly quiet, it is evident that he needs more support than he is being given at home. We soon discover that his home life is lacking – with no father and a mother who is heavily addicted to drugs (and one of Juan’s clients), Little is raising himself. He fills a bath with dish soap, boils a pot of hot water to add to his bath tub, and sits quietly with suds on his head. Little’s life is surrounded by loneliness.

Juan and Little develop a sweet bond – as evidenced by a magical scene of them swimming together in the Miami ocean. Juan teaches Little how to float. They laugh. Little has somewhat of a father figure in Juan, and the film gives us a sense of hope in their relationship.

The story jumps forward, now Little goes by his real name, Chiron (played impeccably by Ashton Sanders – seriously, this young mans career should be experiencing the momentum of Timothee Chalamet with this performance), and is a teenager more isolated than ever. He wanders the school hallways dealing more directly with questions about his own identity and facing more scrutiny from his peers than before. He finds comfort in one friend who shows him kindness named Kevin (Jharrel Jerome), and in one heartbreaking moment, allows himself to be vulnerable, saying “I cry so much I could turn into drops.” In this world, masculinity reigns and violence is the only gateway to fitting in.

Sanders shows us a Chiron who due to so much abuse and isolation, is almost completely suppressed. It is as though as any moment, he could crack, like the tear ducts are forming behind his eye balls causing him a headache, and his throat is closing up from trying not to cry. The performance is so visceral, I think the audience can feel that too. Film journalist, Peter Bradshaw, wrote it perfectly: “[the film gives] such full access to his thoughts and feelings that it’s as if you are getting them delivered intravenously.”

We see a grown Chiron (Trevante Rhodes) – who now goes by “Black” (a nickname once given to him by Kevin) – wears a mask, by way of bulked up muscle and gold teeth “fronts” which he has created to survive. After years of pent up rage and fear, he ends up serving jail time, and relocates to Atlanta, Georgia to start over. No one here knows him, and he does not have to face any truths about himself either – namely, that he is gay. That is, until he receives a call from his old friend Kevin (now played by André Holland). Due to well-aligned casting and Jenkins weaving these three chapters together finely, the story does not get lost in the episodic form. We see the sad eyes of Chiron as a boy emulated in Chiron as a man.

“Moonlight” is an adaptation by Jenkins from a play written by Tarell McCraney called “In Moonlight Black Boys Look Blue.” All of this work is grounded in the understanding that human relationships build us into who we become. Even the smallest moment can affect the trajectory of our lives. They can cause us to adjust ourselves in order to exist. The film is also heavily driven by whimsical cinematography – which is almost similar to the films of Terrence Malick – but much more focused. Things are shown rather than spoken, just like many of the hidden truths a person might face which society has not given them the words to express.