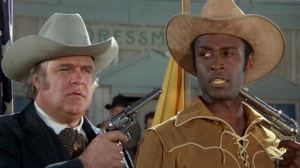 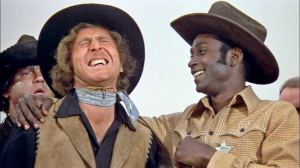 I spend a lot of time in Rockaway Beach, Queens during the summers & I have written about this spot before, but during the pandemic they have reconfigured their space to accomodate the new conditions. One of my favorite spots for tacos is Rockaway Beach Surf Club, which serves tacos from the food truck called Tacoway Beach. They are some of the best tacos you will ever have & right now they are being served as a box set – you pick your favorite taco preference (fish tacos, papa con chorizo, etc.) and it comes with a veggie bowl (cucumbers and zucchini grilled). Also, they serve some of the best frozen margaritas in the area or, if you prefer, an assortment of beers and other spirits. The place was already located outdoors mostly, and so the set up did not have to change too much. If you are ever in the area, this spot is a must-see.

“Blazing Saddles” (1974) is one of Mel Brooks most famous comedies, though he is also known also for “Young Frankenstien” and “The Producers,” both of which also star Gene Wilder. Wilder was the brilliant comedian most known for his role as Willy Wonka in the original “Willy Wonka & the Chocolate Factory” in 1971, but his collaborations with Brooks shot both of their careers into stardom – garnering the pair an Academy Award nomination for Best Adapted Screenplay (for “Young Frankenstein in 1974) and leaving behind a selection of films that forever tie them to success in the industry.

This particular film was their most contentious, as it is a considered an American satirical Western black comedy, and deals straightforwardly with matters of race relations in the United States, especially during the time in history where tensions were high, a reality that most Westerns refuse to acknowledge. The film was mostly a great success and has continued to exist as a classic comedy of its era – primarily due to its absolute unrelenting silliness. The music plays a major role in narrating the absurdities of the story, most of which was written by Brooks himself – including , “The Ballad of Rock Ridge”, “I’m Tired”, and “The French Mistake”. In typical Brooks & Wilder fashion, the film is laced with clever references to other pictures, that film lovers can grasp onto and smile internally at the nod. When Madeline Kahn, as Lilli Von Shtupp, gives a cheeky performance to “I’m Tired,” it is a direct homage and parody of Marlene Dietrich’s performance of the Cole Porter song, “I’m the Laziest Gal in Town” which is featured in Alfred Hitchcock’s 1950 film “Stage Fright.”

One of the most controversial elements of the film is, without surprise, the abundant use of the N-word. Regarding his decision, Brooks states that he fought for the right to keep the content (which also included the flatulence scene and a few others) which Warner Bros. pushed back on. According to the director, the black cast members, Cleavon Little (who plays Bart, the new sheriff in town and leading role), and Richard Pryor (American stand up comedian who worked as a writer on the film), continually supported his inclusion of this term.

The story of “Blazing Saddles” surrounds a small, bigoted town called Rock Ridge that is suddenly faced with the reality that the new sheriff in town is a black railroad worker named Bart. Initially meeting Bart with only prejudicial hate, the townspeople are eventually forced to warm up to their new leader as they realize that him and his drunkard, gun-slinging wing-man (Wilder) are their only defense against more dangerous enemies coming to destroy the town all together.

It is slapstick and chocked-full of gags. It’s vulgar and it’s provocative. In all of this, “Blazing Saddles” went down in history as one of the most memorable comedies of its time, and was inducted into the Library of Congress for being “culturally, historically, or aesthetically significant” in 2006. It is a fan favorite and an all out good time. Especially after watching all the other all-too-serious Westerns in the genre, this film manages to capitalize on all of the beloved elements (gun fights, bar brawls, saloon girls and barrelhouse music), while bringing levity and fun. A must-see.