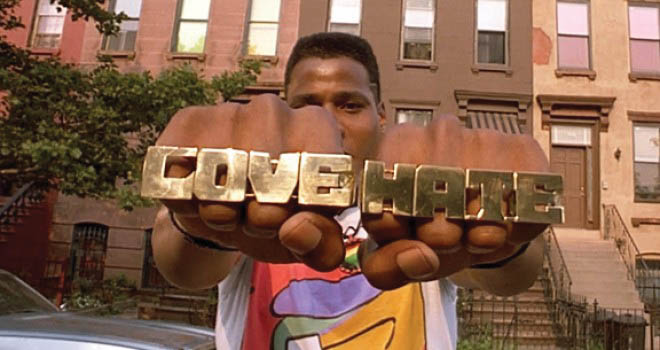 “Been eating here for over a decade.”
“Delicious and affordable food.”
“Finally there’s a nice place to go for some comfort food.”
“Loved the fried Catfish. Pretty much everything I tried there tastes delicious.”

“Do The Right Thing” (1989) was produced, written and directed by Spike Lee, who also plays one of the lead roles of Mookie, a young man living in a Bedford Stuyvesant neighborhood of Brooklyn in the late 1980’s. Mookie works at the corner pizza joint, Sal’s Pizzeria – Sal is played by Danny Aiello (who was nominated for Best Supporting Actor for this performance), and he runs the place with his two sons, played by John Turturro and Richard Edson.

We get to know the characters on this block through seemingly trivial interactions. We meet Da Mayor, the friendly neighborhood drunk (Ossie Davis), and Mother Sister (Ruby Dee) who is the first to say the titular words, “Do the right thing” to Mookie on his way to work. We meet Buggin Out (Giancarlo Esposito – who you will later recognize as Gus Fring in ‘Breaking Bad’), a vibrant man who voices his plight for more Black faces on Sal’s Pizzeria’s Wall of Fame next to Sinatra, Al Pacino and Sophia Loren. Much of the film is pseudo narrated by Mister Señor Love Daddy (AKA Samuel L. Jackson) the local radio DJ. We get to know Radio Raheem (Bill Nunn) wearing a colorful hand painted t-shirt that costume designer Ruth E. Carter got from a local neighborhood artisan in Brooklyn at the time. He dons Love & Hate knuckle rings and carries a boombox everywhere he goes.

The intention was to show the day to day life in a neighborhood in Brooklyn, and how on the hottest day of the year, tensions are bound to bubble over as race relations reach a height. He highlights the disgruntled attitudes of the Black community, the Italian Americans, Asian immigrants, and the lofty White police officers, which start off innocently enough, but it certainly doesn’t end that way.

“Do The Right Thing” was mostly well-received at the time of release, but over time has grown to achieve growing success and numerous accolades. It is considered one of the greatest films of all time on several lists, including the Criterion Collection, and received an Academy Award nomination for Best Original Screenplay, as well as the aforementioned Best Supporting Actor nomination. In 1999, the Library of Congress deemed the film “culturally, historically, and aesthetically significant” and was selected for preservation in the National Film Registry. This film is incredibly important, and devastatingly still as relevant today as it was upon its release.

However, when it first hit theaters, one critic suggested that it could incite violence and riots across America, and that Spike Lee would be to blame. When speaking about this years later, in 2014, Lee admits that he still cannot get over that comment. The comment is saying that black people “weren’t intelligent enough to make the distinction between what’s happening on screen and what happens in real life, so they would come out of theaters and riot all across America.” He goes on to say, “That still bugs the s–t out of me. I just get mad. Because that was just outrageous, egregious and, I think, racist… I don’t remember people saying people were going to come out of theaters killing people after they watched Arnold Schwarzenegger films.”

The interconnected and potentially mutually dependent relationship between violence in media and violence in the world has been a topic of debate since the first films emerged at the start of the 20th century, and far before that with the stories that were told in books, the theater, music and art. It is not new, but what stands out here is that the violence in question was not, in these reviews, the murder of the young black man by a police officer, but instead the looting and destruction of a local shop. People seemed more concerned and fearful of potential riots by young black men and women than the excused violence from the forces sent in for protection.

Spike Lee has remarked on this phenomenon before, noting that it is only white viewers who beg the question, “did Mookie do the right thing?” in beginning the riot, breaking the window.  Black viewers do not ask this question, suggesting that black viewers understand that Mookie felt he no longer had to be held responsible for “doing the right thing” after watching his friend murdered by cops who did not. Viewers who question the riot at the end of this film are objectively failing to see the difference between the damage done to the property and the death of a black man.

This is not to diminish the grief over the loss of the property. But only one of these losses can be rebuilt.

If this sounds familiar, it should. After viewing, it is obvious why this film is circulating right now. It is June of 2020, roughly thirty years after this film came out, and the events almost mimic identically what we are seeing happen around the country at present. An unarmed black man is murdered openly in the street in front of onlookers, and it is treated with such complacency, such matter-of-fact, almost procedural laxity, that it is jarring. And when the police, the ones you would call, scamper off unaffected, the onlookers are left to stand in the streets, helpless and mortified. What does one expect to happen? There was no justice. There was only loss. Everyone should be watching this right now, at the very least to understand how the events that have been taking place are not new. The murder of George Floyd or the murder of Breonna Taylor were not isolated events. These were not one-time accidents. These did not just start happening as a result of racism getting worse. These types of killings have been having for at least thirty years in this exact same way.

It is unsettling, haunting, sickening and shocking. Especially if you are a white person, and you can comfortably avoid looking at the realities about racism in the United States, like myself. It is easy to ignore if it does not affect you. It is incredibly easy to dismiss. It requires the commitment to actually listening and understanding these stories. It has become clear to me that racism is not simply a practice of judging someone else by their skin color, but a system put in place to keep certain people in power with the ability to control other people at their convenience. That is why this has been able to happen.

This movie will and should sink into your skin and stick with you eternally. Spike Lee uses intentional filmmaking techniques to make sure that the audience connects with the characters in the piece even in the smallest ways. You feel the sweat on your skin and the muggy air. You want to jump into the water spraying unabashedly from the fire hydrant. He utilizes low angle and dutch angle shots often, giving the impression that you are standing within the ground, you are seated with the characters on the stoop, you are listening to what they are saying. He also breaks the forth wall most notably during a succession of various characters lashing pejorative insults at each other, as though you have to take them too.

Albeit, the heart of the story is rooted in unarguably upsetting truths, “Do the Right Thing” is a fun movie to watch. It starts out with absolutely killer dancing shots of Rosie Perez, in her film debut, to the song “Fight the Power” by Public Enemy, a song which Radio Raheem plays continually on his boombox, making it the heartbeat of the film. The characters were dressed in vivid colors, and Carter (costume designer) wanted to capture the feeling of Brooklyn at the time, which she felt was a Mecca for African arts. Even while brimming with anger, the dialogue is full of comedic levity. It’s a powerful film in so many ways, and it is an absolute MUST WATCH, especially right now.