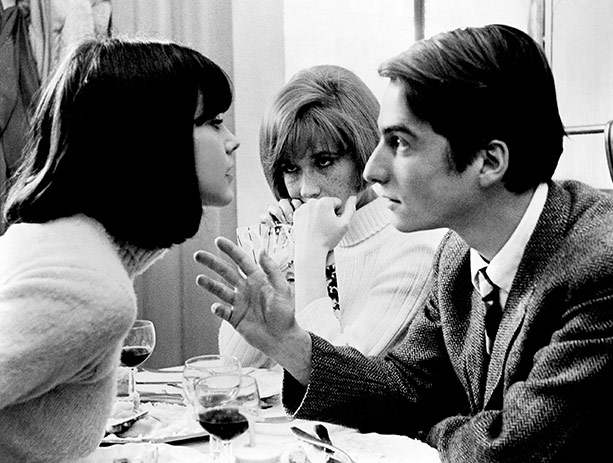 Food: The most fitting thing to make for a French film viewing is a French dish. Here is a recipe for Ham & Cheese Crepes. You will need 4 thawed frozen crepes, 4 teaspoons butter, softened, 4 slices ham, 4 teaspoons mustard and 1/2 cup grated gruyere cheese. With the oven preheated to 300 degrees (if your oven is crap like mine, you may want to preheat higher), spread the crepes with the softened butter. Divide the ham and place on each crepe, top with mustard and powder the gruyere. Fold in half, and place on baking sheet. Bake for 5 minutes, fold again. Bon Appétit!

You could even pair with some red wine & emulate the above scene if you are feeling really immersive.

Film: “Masculin Féminin” (1966) is a Jean-Luc Godard film about a group of young people living in Paris, pursuing career goals and trying to become the people they want to be. It is not inaccurate to characterize “Masculin Féminin” as self-referential. It followed all of the following: “Breathless” (1960), “A Woman Is a Woman” (1961), “My Life to Live” (1962), “Contempt” (1963),  “Band of Outsiders” (1964), and “Alphaville” (1965) among others. There is a scene where the group goes to the movies and they watch a Bergman-esque Swedish erotic film (directed by Godard and starring Eva-Britt Strandberg and Birger Malmsten). The main lead male character, named Paul, played by Jean-Pierre Léaud, is constantly attempting to do suave strapping moves reminiscent of Jean-Paul Belmondo’s character in “Breathless.” Real-life Yé-yé singer, Chantal Goya, plays budding pop star Madeleine.

Madeleine resembles Anna Karina – the actress of many of Godard’s previous films – especially donning banged dark bob and a constant musing gaze.  “A Woman Is a Woman” is about an unsuccessful movie star who turns to prostitution. In “Masculin Féminin” is about an optimistic wanna-be star who speaks about being fascinated by the life of a prostitute.

Starlet and model, Brigitte Bardot, makes a too-quick cameo with theater director Antoine Bourseiller, playing themselves going over a script. The whole reason imaginable for this to be included in the film is that it seems to showcase the life that our lead characters hope for themselves, which typically lives inside their imagination, sitting directly in front of them in reality. It feels like Godard was speaking to the phenomenon where movies directly influence culture and simultaneously movies attempt to accurately reflect culture. “We went seeking greatness in movies, and were most often disappointed. We waited for a movie like the one we wanted to make, and secretly wanted to live.” If there is anything that this movie is really about, it is that. Godard calls this type of youth culture “the children of Marx and Coca-Cola.”

Our lead man, Paul, continues to harp on the troubles of modern society to anyone who is around, whether they are willing to listen or not. Madeleine wants to enjoy herself and have a good time. There is a potential theme that Paul is fixated on the impending doom of society and the world, explaining his gloomy talking points. However, it is also feels like he refuses to accept or acknowledge real-life troubles, such as Madeleine’s apparent lack of romantic interest in him. There are entirely unexplained sequences where horrifying things happen, and Paul and Madeleine are entirely oblivious to them, such as a lovers spat that escalates into a man being gunned down in broad daylight. Initially, I mused that the hook that ties the couple together is that they both witnessed such a thing. Nope. The story carries on as though it never happened and never mentions it again.

The story is told in a series of 15 unrelated vignettes, in what appears to be a format chosen to disguise the lack of structure. Even with this stylized choice, “Masculin Féminin” fails to feel thoughtfully constructed. However, Godard still manages to do what Godard does best, and that is, charm. Goya is mesmerizing, innocent, effortless and bright. There are small memorable scenes and if you are a fan of French New Wave, it is worth watching, and worth contemplating the catch 22 influence of films on culture and culture on films.