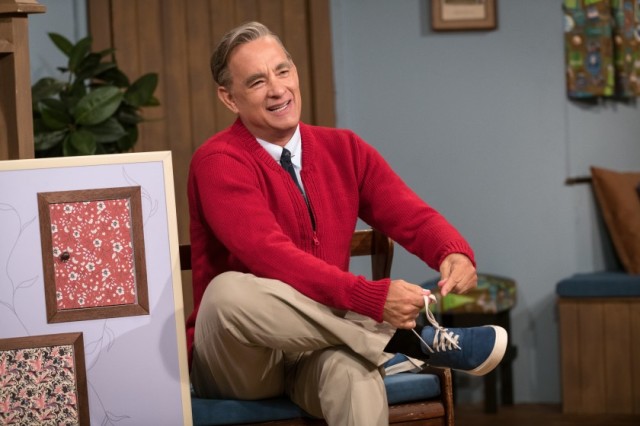 Food: Recently, I got the opportunity to try a new Italian spot in my neighborhood called Cacio E Pepe. Located on 2nd Avenue, it is an authentic feeling restaurant known for their Roman specialties. I split a bottle of the Chianti, the Arugulas salad with pear and pecorino cheese, and the bowl of the Tonnarelli pasta, which is tossed in pecorino cheese & whole black pepper corns. It is amazing because the server actually brings the pasta dishes out inside a giant bowl of Parmesan and scoops the noodles directly from there, collecting cheese along the way. Bene!

Film: “A Beautiful Day In The Neighborhood” (2019) is a story about an award-winning journalist Lloyd Vogel (Matthew Rhys) who reluctantly accepts an assignment to write a profile on Mr. Fred Rogers (Tom Hanks) of the famed children’s show, Mr. Rogers’ Neighborhood. The story is inspired by the Esquire article “Can You Say… Hero?” written by Tom Junod.

By meeting Fred Rogers through the skeptical lens of an investigative reporter who is dealing with suppressed trauma, the film offers a clever approach to a film about such a beloved, and oft described as “saintly” person.  Through this relationship, Heller allows Mr. Rogers to deal with the confrontations that occur when people are unable to receive his kindness as quickly, allowing viewers to contemplate a more human side to him. The makeup and costuming are done with a light touch, prioritizing Fred Rogers’ demeanor and the atmosphere that was created on his television show.

A good biopic does not need to take place of a documentary in showcasing a persons life as we know it inside and out, using a well-crafted imitation and giving audiences an expose format. A good biopic can encapsulate a persons legacy by telling a story that embodies the lessons that were instilled through this persons actions. “A Beautiful Day In The Neighborhood” weaves some of Mr. Rogers’ iconic television visual sets throughout the film as a way of allowing our lead to explore the untapped fears he had been experiencing in his own mind, in the same way that as children we were taught to understand the darker parts of life through his show – by speaking to puppets like shy Daniel Tiger or sassy Lady Elaine Fairchilde about how we are processing our feelings about the world around us.

Further, “A Beautiful Day In The Neighborhood,” with Heller’s ability to hone complicated people (see: “The Diary of a Teenage Girl” (2015)) and with an intelligently written screenplay by Micah Fitzerman-Blue and Noah Harpster, gives audiences a participatory role; an entry point where we are allowed to follow our natural instincts and be critical of a person who is too kind, too thoughtful, too selfless because we assume it is disingenuous.  We, then, get to experience the character arc of not only Vogel learning to become a better version of himself, but also of finding inspiration through the sincerity of Mr. Rogers actions. Well done.