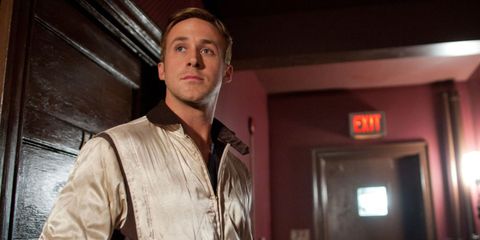 Food: I found myself at Brooklyn Brewhouse in Boerum Hill this week, and was delighted to find that they serve pigs in a blanket to accompany their beer selection. With an easy-going sports bar-esque atmosphere, and quick bites, it is a fine spot to hang out if you are in the area (perhaps, if you are near Alamo Drafthouse!).

Film: I loved the experience of watching “Drive” the first time I saw it, but years later, I can still attest to my profound love of this film. In 2011, I distinctly remember going to the dollar theater on a late Sunday night, with people I barely knew, and unsure about what to expect. However, what I got was an obsession. I could not get enough of the au courant soundtrack (which ended up having a music tour of it’s own) and the slow-motion gangster violence. Now, years later, I can still watch this film back to back and not tire of it.

To start, we hear Goslings distinguished voice laying out his terms of service in a swanky LA hotel room… “in those five minutes, I’m yours. Anything happens a minute either side of that, and you’re on your own.” This moment matches the feeling of being strapped into your seat on a rollercoaster while the employee drones on about the safety regulations, letting your anxiety simmer and build thoroughly. It’s intense and ominous.

The “job” begins, as well as the song “Nightcall” by Kavinsky. We are in. And we are cruising with the Driver (Ryan Gosling) whizzing by city lights, all while the screen is emblazoned with hot-pink cursive opening credits, solidifying a clear homage to retro styles. The Driver anxiously waits for the criminals to rush from the building from which they have presumably just robbed and this entire moment is paced with the deafening clicks of his stopwatch. As soon as both thieves are in the car, the Driver takes off and a cop chase ensues. It is electrifying.

Jumping forward, we are met with a pivotal dynamic, that ruptures the motivations of the Driver, and the film itself: the arrival of Irene (played by the magnificent Carey Mulligan) and her son, Benecio. Doused in powerful glances between the Driver and Irene, viewers are able to experience their mutual affection with minimal dialogue. The Driver is no longer the elusive criminal in the scorpion adorned jacket, but a father-figure, a suitor, a valuable part of this trio. Gosling’s naturally crackling and off-pitched voice creates a sense of vulnerability to this character, shedding his stoic facade ever so slightly. Mulligan displays her ability to convey a range of emotion through the smallest facial expressions and movements. Small breaths, an eyebrow lift, a crooked close-mouthed smile and gentle hands. Through these subtleties, the viewer is able to understand her character’s quiet tenderness, simplicity, and warmth. It is not difficult to develop an attachment to this new “family,” and an equally found shock upon the return of Irene’s formerly imprisoned husband (Oscar Isaac).

Isaac has gained prestige since this release, so it was enjoyable to re-watch this movie after seeing him in subsequent roles. Here, he gives us shame, pride, fear and love as a man who is trying to turn his life around. It is evident that his awareness of his own absence as a father and husband overwhelms him with uncertainty, inviting the pity and near mockery of the others. His character is likable, yet inevitably antagonistic.

We have three other exceptional performances by Bryan Cranston, Albert Brooks and Ron Perlman. Bryan Cranston is fantastic. His character is not as black-hearted as he’d like to be, but he, nonetheless, wobbles around on a bygone pelvis injury, money-grubbing and fraternizing with gangsters. Albert Brooks, mobster, brings a certain casual attitude to the character, which is intriguing. Ron Perlman, born with the jaw destined for “Hellboy,” is chilling in this role. He builds levels to this character, allowing him to be cheesy and oblivious even from his mafioso pedestal.

Complete with Christina Hendricks getting her head botched open six ways from Sunday in slow motion, James Biberi being laid out using hammer-and-nail at a strip club dressing room, and a captivating elevator kiss followed by a real gruesome head stomping, this movie is everything you want it to be. “Drive” combines the mastery of direction (Nicholas Winding Refn), hypnotic cinematography (Newton Thomas Sigel), a synthesizer soundtrack, and nuanced performances. Each element is so tightly arranged. This is a masterpiece in film and sets a new standard for cool. After watching it twice in a 24 hours, I found myself ready to find the time to watch it yet a third, or fourth, fifth… time.