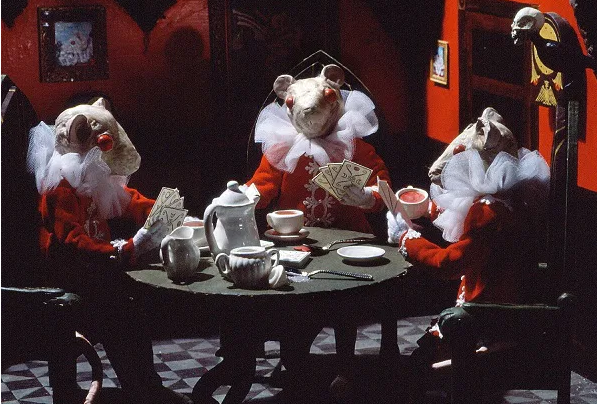 Food: In the spirit of autumn, and this film, I made red tea. I heat up Snapple Raspberry Tea (yeah, I am not much of a tea expert…) and then added Spiced Rum to it for an extra kick. I also made Pumpkin Bread (which then I encourage you to decorate with white frosting, and in red lettering, write the title of this film to be really in theme).

Film: “Blood Tea and Red String” is an enchanting fever dream, a handmade stop motion piece shot on 16 mm film, and made over the course of thirteen years by the fantastic artist, Christiane Cegavske. It is a gothic fairy tale with themes about love, possession, jealousy and class. The film is entirely without dialogue, relying on a serene and emotive score by Mark Growden, who assembles the music from instruments such as wind pipes, accordion, and banjo, and Cegavske incorporates spectral sound effects of elements such as sloshing water or squeaking mice.

In a whimsical forest, a group of white aristocrat mice, sporting lavish red coats complete with ruffs decide to commission a female doll for themselves to adore. They hire the Creatures Who Dwell Under The Oak to create her, which they do, beautifully. However, they grow fond of her, and want her for themselves. They refuse to sell her, and they find an egg nearby and sew it into the doll’s belly. But, the white mice steal her anyway, and the Creatures quickly jump into a reconnaissance mission to get her back. Things do not go as planned, and soon the Creatures are duped into ingesting hallucinogenic berries and are nearly eaten by a carnivorous plant. That is, until, a frog magician saves them by feeding the flora some postmortem hearts instead, and the Creatures after some food and rest, are able to continue their journey. Meanwhile, the white mice are playing cards and drinking heavily, when the planted egg inside their doll hatches, and a bird-like creature with the dolls face flies free.

Though this is a completely unique creation of its own, there are elements of the plot that resonate with tales as old as time. One that comes to mind is the mythological story of the Pygmalion, the sculpture who makes an ivory statue of his ideal woman, a statue whom with he falls in love. Due to Venus, the goddess of love, Pygmalion has a more fortunate ending than the one found here in “Blood Tea and Red String,” but the concept of desiring an idyllic masterpiece that can be possessed is deeply rooted in human nature. For the white mice, they desire a flawless companion. The high standards of an elite, high born group is not unexpected. For the Creatures, it is their need to protect what they have produced, which can speak to ideas about parenthood or God.

Cegavske is also, whether intentional or not, dives into the female experience in this story, particularly when looking at the journey of the doll herself. Many women can relate to the feminine components here: not only being adorned with dainty dresses, cake and suitors, but also with being viewed as a commodity to be bought and sold, owned and controlled. Her ability to participate in her own life feels limited, and because of that, she protects herself with a mask. Her true essence is the bird inside the doll costume, her true face covered by the dolls porcelain faces with replicating features. When speaking about the doll, Cegavske remarks, “I think the doll signifies the public self. The construction that protects or hides the tender inner self. The doll is the mask that is mistaken for the real face” – a concept that male or females can understand.

“Blood Tea and Red String” is a gorgeous, fairy tale for adults. Akin to a ballet, it combines adult themes and childlike fantasy, speaking to the most universal human elements without relying on a single word. Nathan Lee of the NYTimes calls it, ‘at once wondrously obsolete and perfectly au courant.’ It is timeless, captivating, medieval, ornate, magical and extraordinarily cool.