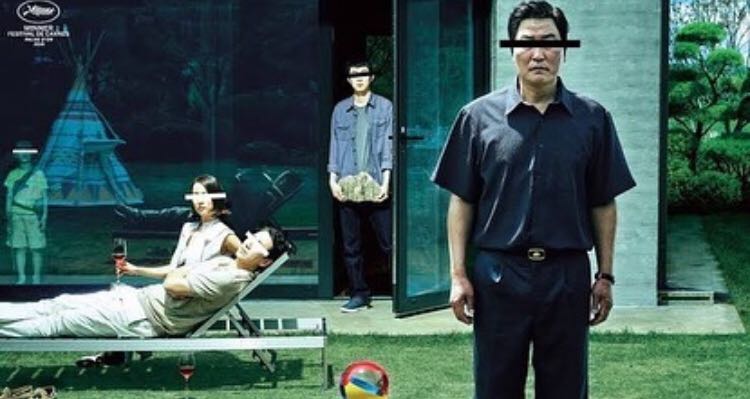 Food: I had been hearing about X’ian Famous Foods for about a month now, and also on an episode of Netflix’s ‘Ugly Delicious‘ I found out that what Americans understand to be Chinese food, is actually not reflective of food found in China at all. Our classic Lo Mein noodle dish is not even easy to find in China. Apparently, it is difficult to find authentic Chinese food anywhere in America, but X’ian is supposed to be most reminiscent of a genuine Chinese dish. I went with a simple order of their non-spicy ‘Mt. Qi Vegetables Hand-Ripped Noodles’ dish. Hand-ripped noodles are similar, but larger than tagliatelle pasta and the mix of flavors was savory, but still light. It was tasty and unique – definitely worth a try! I am intrigued to go back, and venture out with some spicier dishes and maybe try the burger.

Film: Bong Joon-ho’s new film “Parasite” has been a festival darling, winning the prestigious Cannes’ Palme d’Or prize and buzzing all over the internet since its debut at each festival. IFC Center (West Village) scored early release showings, which sold out all weekend and caused a record-breaking box office stir for this independent theater. When I went a few hours prior, there were showings every half hour, taking up multiple screening rooms, and it was already all sold out for the night. (Lucky for me, someone had just returned a ticket, and I was able to snag it!)

The film opens with a family struggling to make ends meet, drinking cheap beer and folding pizza boxes for a local spot as an odd job their mother picked up. Between the mother, father and two adult children, the Kim’s are a close-knit crew, warmly joking around together. They live in an underground half-basement tucked away in an alley – the kind of place where a stumbling drunk frequently urinates right outside their window. When the son, Ki-Woo (Choi Woo-shik), ends up getting a job as a tutor for a wealthy family, they all construct a scheme to get them positions under the same roof.

Much of the film is designed to highlight the drastic differences between the lifestyles of the rich verses the poor.  The Park’s enjoy a spacious, modern and immaculate mansion with sweeping windows that overlook a clean cut back yard, while the Kim’s live in squalor. The landscapes of their home life alone create a vast juxtaposition between the two social classes. Using exemplary satire, “Parasite” exposes the ignorant perspectives of the wealthy, emphasizing their gullibility, lack of tolerance and limited point of view. Conversely, the destitute Kim’s are navigating from a position of survival, a place where one might behave under a considerably different code of ethics.

The film stands out for a number of reasons. Joon-ho tackles this material with depth, using intricate set design to compose a gaping difference between his two lead families, and haunting cinematography to achieve the tone of this mixed genre, black comedy/horror. Further, the characters are fully fleshed out, which vindicates each action as being a point of conviction, and not a vehicle to move the story along. This diligence allows the audience to see the humanity in the characters of either situation, which is a crucial ingredient in making sure that a darkly humorous story like this remains grounded.

“Parasite” depicts the shrinking, or lack of, a middle class in a way that will haunt viewers in the same way that “Get Out” (2017) did when showcasing systematic racism. As it warps into an unexpected thriller, it also feels incredibly emotive in unforeseen ways. Shocking, heartbreaking, peculiar, and almost whimsical, “Parasite” is unlike any other and is easily one of the years best.