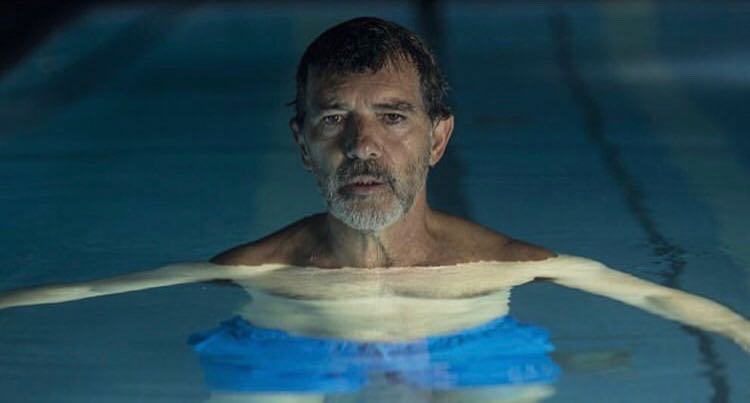 Food: A great matinee go-to that is tasteful to eat and easy to make is toast. On this particular Sunday, I made toast with cream cheese and Bonne Maman, Strawberry Preserves. I also opted to treat myself with a Starbucks vanilla latte to fend off the morning grogginess.

Film: “Film and Glory” is my first Pedro Almodóvar film, although he came to recognition on the international circuit since 1988 with his film, “Women on the Verge of a Nervous Breakdown.” He began his career in Spain after the countercultural movement,  La Movida Madrileña, that took place in Madrid that became a renaissance of the arts following the death of Francisco Franco.

This piece of cinema is absolutely stunning from the start. The first few moments of introductory credits are comprised of a series of mesmerizing swirling colors and patterns, which elegantly transitions into a sea in rural Spain where his mother (Penélope Cruz) and some neighborhood women are doing laundry and singing together.

Antonio Banderas is Salvador Mallo, a film director who, after declining physically, begins to reflect on the events of his life. This film is deeply personal and sentimental, driven by the most grounded performance of Banderas career. (He won the Best Actor prize at Cannes this year for this role). We meet a young Mallo who is dubbed a musical genius, and his teachers to forego his academic education to allow him more time to practice. In a creative animation, the audience is told that Mallo learned geography through his years of traveling as an esteemed director, and he learned anatomy from developing a series of ailments later in life. Almodóvar spoke about this clever approach, saying that “he didn’t want his character to be complaining continuously so it was better to just pin it in the beginning.” He needed the spectators to be aware of these ailments, but the list allowed him to speak about pain somewhat ironically. He said that this scene was built by first creating the list, which he then gave to his composer Alberto Iglesias, who created the rhythm for the sequence. These pieces were given to an animator who finalized the design. Almodóvar noted that he was aware of the possibility that it could disconnect the audience from feeling what he wanted them to feel, but ultimately decided he would risk it.

We enter with an aged Salvador Mallo when he runs into an old friend, where he reveals that he has reluctantly rewatched his old film (after not seeing it since its premiere 32 years prior) and decided that he likes it after all. We quickly learn that he had been unhappy with the performance of his primary actor, Alberto Cresto (excellently played by Asier Etxeandia) and they had not spoken since. A local theater wants to do a revival screening of the film, and asked him and Cresto to come in for a Q&A. Mallo makes the journey to visit his old companion, who we quickly learn is a fan of “chasing the dragon.” Mallo decides to partake out of “curiosity,” revealing his diminishing self worth. When he starts consuming heroin, he knows better and he knows that he is taking the risk that his life could be in danger. He states that “life is meaningless when you are not directing” and with the severe pain in his back and frequent headaches, he dreads that his debilitated body will no longer be able to handle the stress of shooting. His addiction is not to heroin, it is to filmmaking.

Much of the film has references to and music from the famed Mexican singer, Chavela Vargas, who Almodóvar incorporates into many of his films. She was a Costa Rican singer who spent more of her life in Mexico, playing primarily at small bars and cantinas. She opted to wear trousers and slouchy ponchos, which caused contempt for her within the music industry. She was not accepted to play on the big stages or TV shows at the time, but she stood her ground at a time that was difficult for women, and became of the great LGTBQ icons of her generation. Almodóvar spoke about discovering her in the 1990’s and revealed that after hearing her, he felt he had known her his entire life. Her music is grounded in extreme passion and centered on abandonment. Suiting with the themes of isolation and being forced to abandon his greatest love of story telling, her music resonates with the place in life that Salvador has found himself with his film takes place.

“Pain and Glory” is Pedro Almodóvar’s first film that is autobiographical in nature, commenting, “all my films reflect my life, but I never wrote an autobiography.” He suffered from back pain, himself, which he marked the genesis of the film. He wrote a few pages, which quickly developed into the script. With the isolation of injury, he had the mental space to begin thinking more about his childhood, but having the juxtaposition of the future and past gave him the “key” to create the script. Many of the childhood scenes are drawn from his own stories or stories from his siblings and friends, but mixed with fiction. Though it is not shown, there are hints that our lead character also experienced a baroque lifestyle, full of adventure and excitement, prior to being confined by his physical frailty, where he is finally left with the stories from his own mind.

We see a beautiful collection of stories from Salvador Mallo’s most formative years, which unweave and unravel as a means of fleshing out who he is as a person. Through a script found and later performed by his rekindled friend, Cresto, we learn about a period of his life where he fought to salvage a relationship with a man fighting addiction. We are brought to his childhood living in a beautified cave, where he spends time with his spirited mother, and tutors a handsome illiterate laborer. The memories give a vivid and captivating portrayal of rural Spain.

Antonio Banderas in this role is opposite than the usual bravura that is seen in the epic characters of his previous films. He had to rely on minor gestures to tell the story which was new to him, but Almodóvar spoke about how Banderas understood this from the beginning and said that this was one of the easiest times that they had working together, despite him feeling like he had to “kill the Antonio Banderas” that we know in order for him to take on this role. He said that Banderas approached the role completely naked, and made himself a material that the director could cold with his hands.

This is an incredibly beautiful film. Sentimental and meditative, but also clever and comedic, “Pain and Glory” is masterful in tone, and constructed with the motif of flowing water. It is reflective of how life is ever moving and changing, and how with time, memories morph and mean something new, while some will remain the same, as poignant as ever. Pedro Almodóvar’s bares his soul with this fully-realized character study that proves the old adage: sometimes the only way out is through.