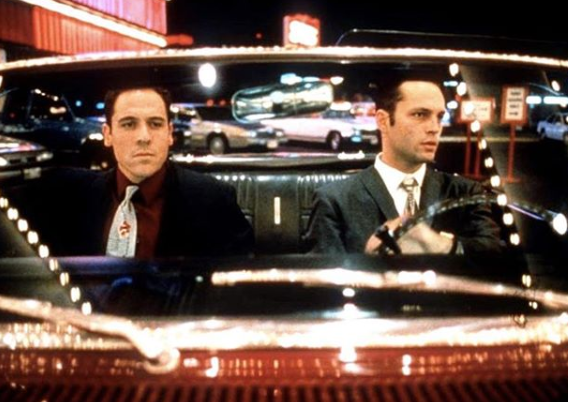 Food: It was a Tuesday, and despite the snowy weather, tacos were meant to be had. On St. Marks (in the East Village) stands an underappreciated Mexican restaurant called La Palapa which provides $5 frozen (and non-frozen) margaritas every week and has delicious Mexican food options as well. I got a regular frozen margarita with salt on the rim, a couple of fish tacos and, of course, the spicy elote. (Very spicy!)

Film: After the feast, we were just ripe for the occasion – to ride the road of singledom with some “beautiful [man] babies” – a young Vince Vaughn and Jon Favreau, among others, through late 1990’s LA.

Swingers starts as Mike (Favreau) mopes to his buddy in an desolate late-night coffee shop about his ex girlfriend he left in New York. “You’re the only person I can talk to about this stuff” he gripes – before heading home to his answering machine which is full of numerous messages from various friends who have all been barraged with his emotional word vomit about his ex. Mike is in a slump.

His crew of companions and himself are all trying to make it as actors in the Hollywood scene. With self-made slang, such as using money as an adjective (“You’re so money and you don’t even know it!”), they bob around like fish waiting for hooks. The story follows Mike through the quietly monotonous, painful, and occasionally liberating lifestyle of being single – especially newly single – as he tries to get back on his feet.

Despite starting out in a manner that seemed more reminiscent of a Hangover-type buddy comedy, this one actually becomes a sensitive and specific tale of a snapshot of life, that I believe is so successful because of its nuance and subtlety. It resonates with people. Impressively written by Favreau himself, it felt incredibly close to home. The moments of stifling discouragement as he attempts to get back on the horse and pick up someone new, for example, were the perfect mix of pain and humor – which makes the comedy work so much more effectively.

The audience is reeled in and tied closely, so that by the end, that ever slowly waking feeling of finally forgetting, finally moving on, is viscerally felt. We are with Mike. We are rewarded.

This film is unsurprisingly hilarious. What is unexpected is the charm.